Giving directions in Farsi, can seem surprising. In many countries, addresses start with the name of the street and the building plate along with the zip code. The names of residents are written on doorbells and post boxes. But in Iran, addresses are not just as easy because they are realistic instructions to reach the destination, and can sometimes be a three-line text written unlike most countries from general to particular.

Addresses in Iran start from the name of a famous street, neighborhood or square, then comes the name of the main street or the boulevard and then that of smaller streets or alleys. Sometimes you see several street names coming one after another. For example, the name of the longest street in Tehran is Vali-e ‘asr. But there are more than twenty streets in other parts of the city which are also called Vali-e ‘asr.

Iranian addresses may in some cases contain strange details for guidance like “right after Pesiyân bus stop” or “opposite to the Parsiân Bank” or even “after the Keyvân barbershop alley!”

Finally comes the house number, called pelâk in Farsi, like in French (plaque). Usually, the floor and the unit numbers follow the house number. Every house has a zip code, but you might not be able to reach the destination by typing the postcode on your smartphone map.
Still some addresses may be written in shorter forms, example:
Tehran, Roodaki st., Niroomand st., #5, unit 3
or
تهران، خ رودَکی، ک نیرومَند، پ 5، و 3
Where خ is the name of the street, ک is the name of the alley, پ is the house number and و is the unit number. 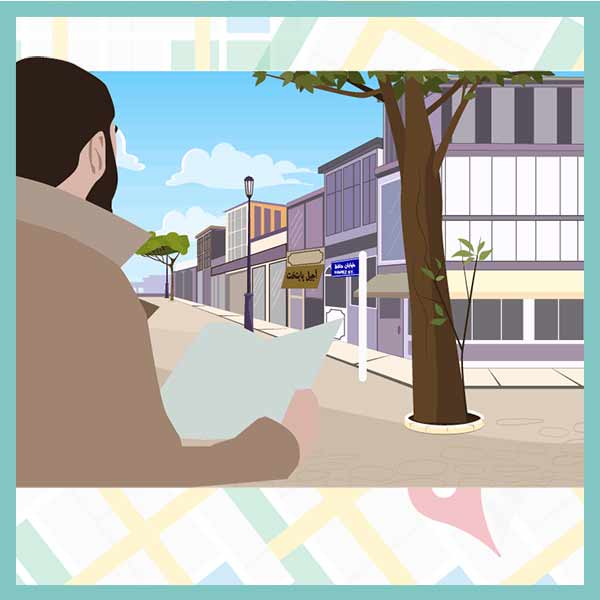 You don’t need worry about addresses anyway because you will easily find any address in all Iranian major cities. You can ask people addresses using the following words and phrases. Most Iranians are very kind to guests and will most certainly help you out or even accompany you to your destination (funny!).

To help you learn Persian, our experienced Online Farsi tutors in Farsimonde provide you with the best online Farsi classes and offer you the best Farsi learning methods.