Khayyam as a Scientist

In our modern world, when we hear Hakim Omar Khayyam (Xayyâm)’s name, his Rubaiyat is the first thing that comes to our mind. But in his time, Khayyam was a well-known scientist, philosopher, and mathematician. Khayyam was born in the 11th century in Nishapur, one of the main scientific centers of the region. The majority of this region’s population were Zoroastrians before converting to Islam. Khayyam experienced living during the Al-e Buya and the Seljuk dynasty. Thus, he was familiar with different schools of thought.

As a mathematician, Khayyam worked on geometry, algebra, and arithmetic. His studies on parallel lines, angles and triangles, real numbers and proportions, cubic equations, and extraction of the root can be found in his books.

Khayyam was also an astronomer and was commissioned by Sultan Malik-Shah to build an observatory at Isfahan. One of his other responsibilities was to revise the Persian calendar and he accomplished it in such a precise way that even now, after a millennium, the Iranian calendar, one of the most precise calendars in the world, is based on Khayyam’s calculations.

Khayyam was also interested in philosophy, music, and literature. He has studied the philosophy of existence, philosophical contradictions, free will, and determinism and has written some books on these topics. He has also analyzed Iranian music to figure out the mathematical relationships among notes, tetrachords, and musical tones.

Symbols and Themes of Khayyam’s Poetry

Rubaiyat is a summary of Khayyam’s philosophical studies, conflicts, vast knowledge, and curious glance at the world. Thus, his poetry was progressive and beyond his time. The concepts like “carpe diem”, “absurdism”, “will power and determinism”, “creation and death”, “turning back to the beginning”, and “doubts in the existence of heaven and hell” are repeated themes in his poetry.

Khayyam has repeatedly used jug and potter as symbols for human beings and the creator. The clay jugs are fragile and breakable, like humans who are mortal and defenseless. This metaphor is unique in Khayyam’s poetry, but he used other poetic symbols such as wine, candle and butterfly, nature, and natural elements, too.

Khayyam is one of the most salient Iranian poets whose mausoleum in Nishapur is visited by many literature lovers every day. He used to live in the northeast of Iran almost a thousand years ago, but his poetry has been spread everywhere in Iran. For instance, in Bushehr, a city in the southern part of Iran, people have integrated his poetry with their folk music and created a tradition of Khayyam-Khani, reading Khayyam. His poems are sung in traditional, pop, or even Iranian rock and jazz music.

Worldwide, Khayyam owes his fame to Edward FitzGerald’s English translations of Rubaiyat-e Khayyam. In 1892, Khayyam Club was established in London. Later, his Rubaiyat was translated to many other languages and added to his fame.

Here are two Rubais we selected for you. In the first one, you will get familiar with the concept of jug and pottery while listening to a piece of folk Bushehri music by Mohsen Sharifian. The second Rubai is an example of alliteration in which Khayyam has used the “m” and “j” sounds to make the verse more rhythmic. Enjoy listening to a piece of Iranian pop music by the Nasiri brothers while reading the second Rubai.

ku = where is
kuzegar = potter

Each one shouting with its language and understanding of the world
Where are the pot maker, the seller, and the buyer? 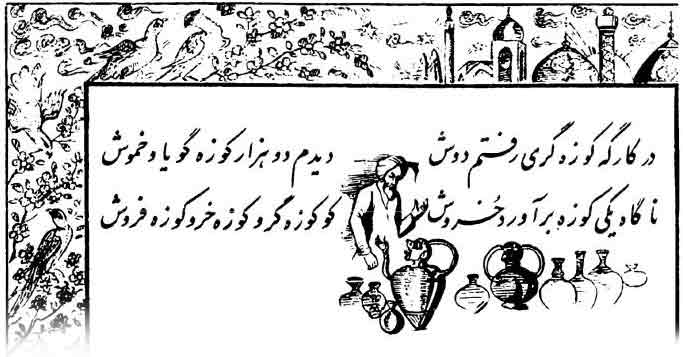 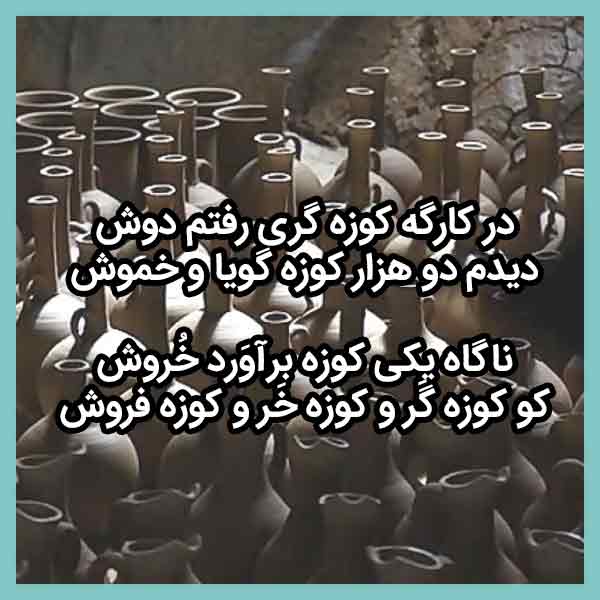 Here we are with wine and delightful music in this ruined corner (a metaphor for this world)
Our souls, hearts, goblets, and garments are filled with wine lees

Heedless of hope of redemption or dread of punishment
Free from earth, wind, fire, and water (four elements of nature) 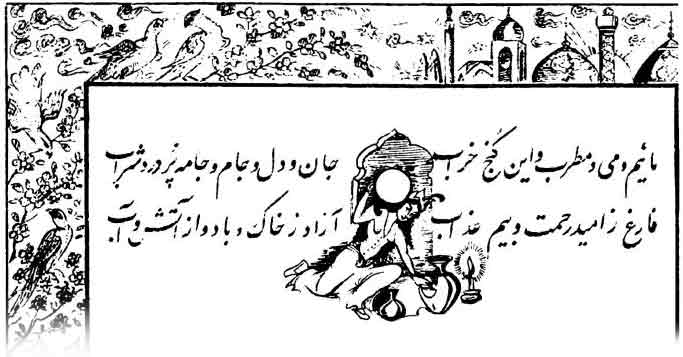 Page load link
Open chat
How can I help you?
CANTACT US
Hello
How can we help you?
Go to Top