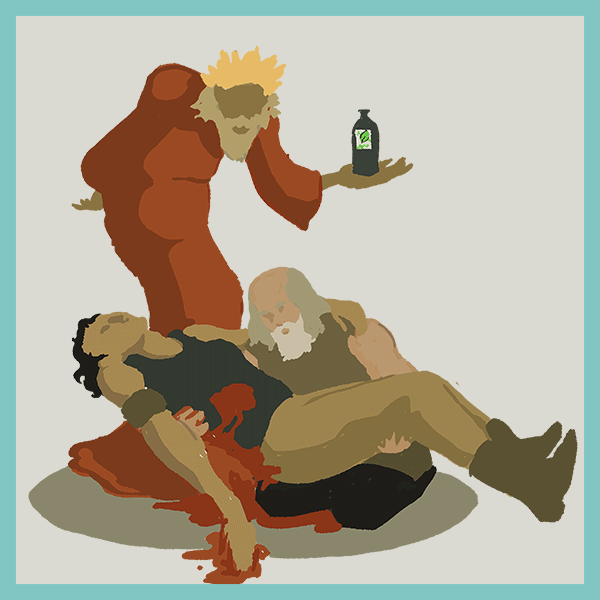 Sometimes, you may need help understanding what a Farsi speaker intends to say despite knowing the vocabulary and structure of the sentence. They are probably mentioning a particular name or a historical event that you do not know about, but it is rooted in the Persian speakers’ collective memory. The reference of these allusions can be religious stories from Quran, mythological or love stories, and historical events. Using allusions in Persian literature, called talmih in Farsi, and colloquial Persian is common. One of the most popular allusions used by Farsi speakers in Iran, Afghanistan, and Tajikistan is “nušdâru ba’d az marg-e Sohrâb,” which means “panacea after Sohrab’s death.” Before learning the signification and function of this phrase, we’d better read the story of Sohrab and Rustam from the Persian Epic called Shahnameh.

Rustam-e Dastân is one of the most eminent heroes of Shahnameh, an intelligent warrior with unforgivable mistakes. The battle between Rustam and his son, Sohrab, is among the most poignant tragedies in Shahnameh. Rustam leaves her wife, Tahmineh, to attend a war before their son’s birth; therefore, he does not know Sohrab. Years later, Sohrab, a young fame-seeker warrior, accepts hand-to-hand combat with Rustam. A conspiracy, of course. Rustam and Sohrab do not know each other, and Sohrab’s attempts to figure out his opponent’s name remain fruitless. They start the combat, and a whole day of fighting tires old Rustam. He beguiles young Sohrab to cease the fight and pursue it the next day. On the second day, Rustam wounds Sohrab with another trick. When Sohrab cries out that his father, Rustam, will take revenge for his death, he finally recognizes his son and regrets what he has done. He pleas for nušdâru, but king Keykâvus, scared of the two heroes’ unification, lingers to send it. Sohrab succumbs a few hours before the medication arrives.

The tragedy of Rustam and Sohrab is alluded to in various ways in modern Persian and classic poetry. “nušdâru ba’d az marg-e Sohrâb” is also used as a proverb in colloquial Farsi to bring up the idea of a help that is received after the problem is solved or an act that is taken too late and in vain. The closest English equivalent to the proverb can be “locking the barn door after the horse is stolen;” however, the Persian one seems to have a stronger connotation referring to a tragic death and is mainly used for severe problems. Following examples from Persian poems and daily conversations can give Farsi learners a better hint.

Now that my mood is ruined, how can nušdaru after Sohrab’s death help me?

You came, my life yours, but why now?
Faithless, why now that I can’t stand on my feet?

You are like nušdaru but coming after Sohrab’s death,
Why did you come so late if you wanted us to be together?

Nima: Useless. It was too late, and I had to sell my car.

Narges: “nušdaru after Sohrab’s death,” then.

Fâteme(h): Maman Pari’s visa is ready. She can finally go to Germany to continue her treatments.

Sa’id: Could it be more bitter than this? It is too late. The cancer is all over her body.

Sa’id: Unfortunately not. It is nušdâru after Sohrab’s death.