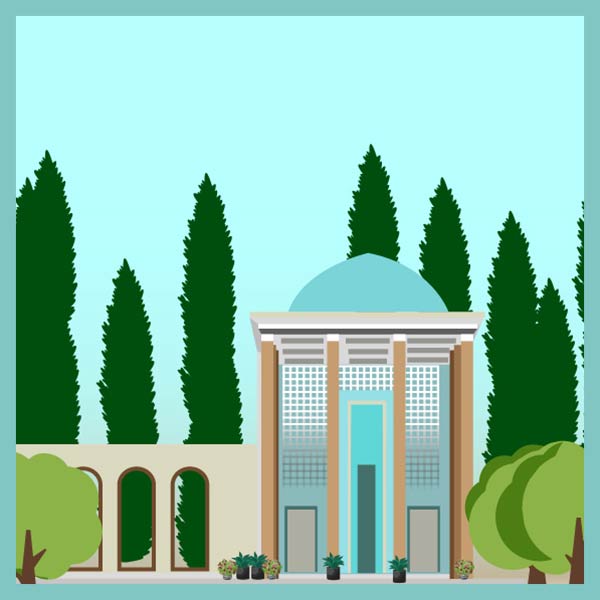 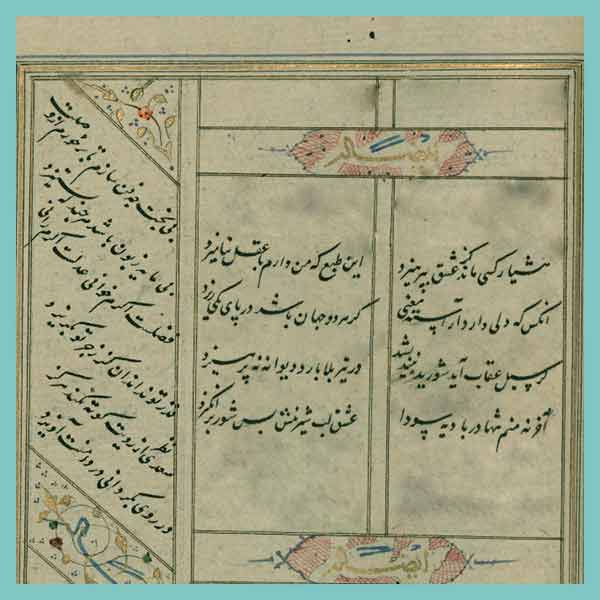 In Iran, the first day of Ordibehešt, the 21st of April, is the commemoration day of Sa’di (Saadi). Iranians call Sa’di “ostâd-e soxan”, The Master of Speech, since he is one of the most famous Persian poets. Šeix Muslih ol-Din, known as Sa’di, was born in 1210. His father was an employee in Iran’s government, called Diwan. At that time, local rulers were fighting over power and the central government was unable to control the country. As a result, Sa’di’s childhood passed in a turbulent environment. He missed his father when he was an adolescent. In 1226, he went to Baghdad to pursue his studies at the Nezâmiye(h) university, one of the main scientific centers of the 13th century. Sa’di was inspired by scholars such as Sohrevardi, known as Šeyx ol-Ešrâq, the Master of Illumination.

After finishing his studies at the Nezâmiye(h) university, Sa’di set off on a journey that lasted 30 years. He experienced living in India, Levant, Egypt, Ethiopia, and Northern Africa. What he gained out of his adventures is reflected in his masterpieces, Bustân and Gulistân. Sa’di came back to Shiraz around 1260 and was supported by the Fars region governors, especially Sa’d ebne Aboubakr. It is said that Sa’di’s pen name is taken from Sa’d’s name. Sa’di’s journey started in 1226 when Mongols invaded Iran and destroyed many cultural centers. But his return in 1260 was at the time when the Fars region was experiencing calmness and cultural flourishing.

Social and political events and Sa’di’s long travels are two main factors that formed his worldview about humanity, existence, and life. Thus, Sa’di has used these tales and narrations to advise kings and people. In his works, Sa’di has always emphasized the instability of life, the value of integrity, and nice speech.

Sa’di wrote Bustan and Gulistan, two masterpieces of Persian Literature, after returning to Shiraz. These two books are Saadi’s most famous works. Bustan includes Saadi’s poems. This book is written in 10 parts and has ethical and educational themes. Saadi’s other book, Gulistan, is a collection of his poems and prose. In this book, Saadi demonstrates his talent and ability in using figures of speech in Persian. Gulistan was a pioneer in Persian rhythmic prose and a milestone in Persian Literature because Sa’di started to simplify the complicated prose writing of the 12th century.

Sa’di’s creativity and his comprehensive viewpoint about different social and life affairs made his two books salient among Persian speakers and Persian learners. Bustan and Gulistan are among the main Persian teaching resources. Everyone who speaks and understands Persian can enjoy reading Sa’di’s poems and prose. Sa’adi’s shrine in Shiraz has been a place where inspires Persian literature lovers. Sa’di passed away in 1292, at the height of fame.

Saadi’s poems are simple and beautiful. So, many Persian-speaking singers use his poems as their lyrics.  Here, you can read a part of Saadi’s poem about love while listening to Shajarian’s song.

hošyâr = wary, wise
kasi = the one
bâyad = ought to
kaz = (short form of ke az) from
ešq = love
beparhizad = avoid

har do jahân = both worlds (the world and hereafter)
bâšad = exists
dar pây-e yeki = for one person
rizad = will pour, cast

[1] In Sufism, šuride(h) is a frenzy because s/he has seen the light of God, so s/he cannot live like a normal person.

A person whose heart is adorned by essence
will bestow it to only one person, even if s/he has everything in this world and hereafter

If a flood of punishment comes, a šuride(h) won’t care about it
If the arrows of catastrophes come from everywhere, a divâne(h) won’t avoid it

From the moment I gave my heart to you, I closed the doors to everyone else
Wherever you have a sit on, many temptations will arise

Page load link
Open chat
How can I help you?
CONTACT US
Hello
How can we help you?
Go to Top