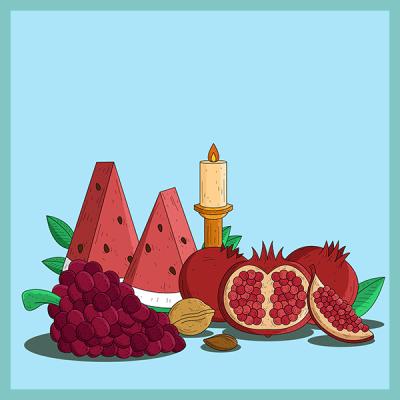 The last night of autumn, December 21, the winter solstice and the longest night of the year, is known as “Yaldâ” or “čelle(h)” in Iran. The name “čelle(h)” is taken from the word “čehel,” which means forty in Farsi. The Zoroastrians call the first forty days of winter “čelle(h) bozorg” and the opening night “šab-e čelle(h).” But celebrating “Yalda” days back way before Zoroastrianism. It has its roots in Mithraism (sun worshiping) and its rituals.

“Yaldâ” means birth. The night symbolizes the birth of “Mehr” or “Mithra,” the god of light and sun, and the victory of light over darkness. The philosophy behind the celebration is that no matter how long and dark a night is, the sun will finally rise and brighten the world. It is why people have been celebrating “Yaldâ” over centuries and continue to do so even today in Iran, Tajikistan, Afghanistan, some parts of Pakistan, and India.

Perhaps because Yaldâ represents a philosophy of rebirth, hope and victory of light and justice over darkness it still inspires people of Iran to these days. The survival of Yaldâ is even more impressive considering the history of Iran with its multiple invasions and arrival of other religions.

“Yaldâ” is the time to be spent with your loved ones, uniting families in a similar way as Christmas in some other parts of the world. On this night, Iranians spend time with their parents and grandparents and stay awake till sunrise, the birth of “Mehr,” telling stories and memories and reading Shahnameh and other poems.

In ancient times, “Yaldâ” was celebrated by setting fire to fight against the darkness. In more recent times, more rituals were added to the celebration. One of these recent traditions is “fâl gereftan.” This poetic ritual can be likened to a fortune-telling exercise. The completed works of one of Iran’s most beloved poets, Hafiz, plays a key role in this ritual. By asking a question, the book is opened at a random page, and the selected poem reveals the answer to your question. Besides trying to get a glimpse of the future, this ritual is mainly an excuse for Iranians to read and enjoy beautiful Persian poetry.

What to eat on Yaldâ?

What makes a great party is great food. Also, on Yaldâ, fruits and special appetizers play central roles. The most important fruits of the night are watermelon and pomegranate. You may be surprised to hear that Iranians eat watermelon on the first day of winter. But in the old days, people used to store this summer fruit for Yaldâ, believing that eating watermelon in cold weather could prevent catching a cold. Pomegranates symbolize productivity and fertility. Besides this, most Iranians prepare beetroot, cooked beans, nuts, and sweets for the night.

Persian poets have frequently used Yaldâ in Literature. For many Persian poets, the long black hair of their beloved resembles Yaldâ, while other poets have compared the waiting to meet their beloved to the waiting for the sunrise after Yaldâ, a long but promising wait. However, the main metaphor of Yaldâ in Persian literature is the victory of light over darkness. Even the deepest darkness and despair will eventually end when the sun rises.

As you wanted to experience the magic of Yaldâ, we picked a few lines of Hafiz poems to read with you.

I am thinking of, if I can,

Doing something to end grief.

The heart is not a place for the companionship of contradictions

The angle can entre the heart only when the demon goes out.

Companionship of governors is as dark as a Yaldâ night,

Search the light of the sun, it may possibly rise.